Update: Make sure to catch-up on the more recent update on this subject:

After the introduction of the Google Comparison Shopping Service (CSS) Partner Program, CSS partners popped up everywhere. Without proper documentation and knowledge in the market, doubt spread across advertisers about collaborating with such partners.

Google stepped in and has reaffirmed the added value of CSS partners, by introducing new, stricter requirements. As a result, the number of active CSS partners has dropped considerably and now only Premium Partners are still active within Daisycon’s network.

But what are the advantages of using a CSS partner for affiliate marketing? How can a CSS partner work in addition to its own Google Shopping campaign?

Google CSS-partners
A Comparison Shopping Service (CSS) partner is a comparison site. These are websites that collect products and prices from different webshops. Through promotion on Google Shopping, they send traffic to these webshops.

We noticed among our advertisers that there is still relatively little information available on Google CSS partners, or only the basics.

For this reason, we conducted a survey among both advertisers from Daisycon’s network and colleagues specialised in this channel. The interviewed advertisers are active with at least one CSS partner, to give you more insight into such a collaboration. Supplemented with information from our specialists, they provide answers to three important questions:

1. What to consider when choosing a CSS partner?

Despite the fact that a large proportion of Daisycon advertisers now use at least one additional CSS partner for promotion on Google Shopping, there is still a group of advertisers who do not take advantage of this opportunity. Our survey showed that the two most important reasons for using a CSS partner are:

But what if you already have a Google Shopping campaign running? And what considerations do advertisers make before starting a CSS partner?

Considerations for using a CSS partner

Advertisers active with their own Google Shopping campaign

More than 75% of the advertisers in our run their own Google Shopping campaign. 25% do not do this or have it done via a Google CSS partner from Daisycon’s network.

Advertisers active with at least one Google CSS partner

In the image below you can see the results of the question whether the cooperation with a CSS partner has a positive effect on your own, existing Google Shopping campaign.

From this we can conclude that your own Google Shopping campaign will not be negatively influenced by the use of a CSS partner and that your activities and the cooperation will give even more results.

Are you considering to use a CSS partner? Read on for more information or contact us.


2. What are the most important benefits?

A positive collaboration with good results is not the only benefit that emerges from the survey. Below you will find four important benefits for using a CSS partner, according to our advertisers.

Higher visibility and a more total turnover from Google Shopping

The majority of advertisers indicate that they have realized more traffic and transactions since the activation of one or more Google CSS partners, in addition to their already existing Google Shopping campaign.

No extra costs, but commission based on actual sales

The average CPC expenditure can fluctuate strongly on a Google Shopping campaign. Promotion on this platform is therefore now possible with a compensation model where you pay for the result achieved. Performance Marketing pur sang. By fine-tuning the reimbursements to, for example, product level, you can ensure that there is always sufficient return from a campaign.

Expertise of a CSS partner

By entering into a partnership with a CSS partner, you can immediately make use of their expertise. In addition to the technology (e.g. to make in-depth analyses), a CSS partner often has a huge portfolio of other campaigns within the same industry. As a result, they can always provide you with relevant advice.

In addition, the expertise of a CSS partner also provides a great deal of convenience and time savings. Therefore, a lot of advertisers have outsourced their Google Shopping campaigns to CSS partners in Daisycon’s affiliate network.

Various Google CSS partners offer the possibility for a short trial period, during which they will be accountable for the CPS for the first 1,000 clicks. This way, the possible impact on your own Google Shopping campaign can be analysed on a small scale and without risk.

3. What does a partnership with a Google CSS partner look like?

After selecting the right CSS partner(s), the collaboration starts immediately. We will advise you which partners from our network are best suited to your target group.

The chosen CSS partner will then set up a Merchant Center for you. This will clearly show you where and when you will be promoted on Google Shopping by this CSS partner. In the Merchant Center, the CSS partner manages the product feed that you make available in Daisycon’s network.

Based on this product feed, Google Shopping Ads will be created and the CSS partner bids, on behalf of you as an advertiser, in the advertising auctions.

In general, a CSS partner can have a new campaign live on Google Shopping within 1-2 weeks. It is advisable to be in regular contact with the CSS partner or your channel manager about the performance of the campaign during the first period, so that adjustments can be made if necessary.

The traffic that is forwarded from these advertisements to the webshop is for the account of the CSS partner. Subsequently, the CSS partner receives a fee (CPS) by means of a performanced based model. This is done via Daisycon’s interface. The flow of commission is visualised in the image below. 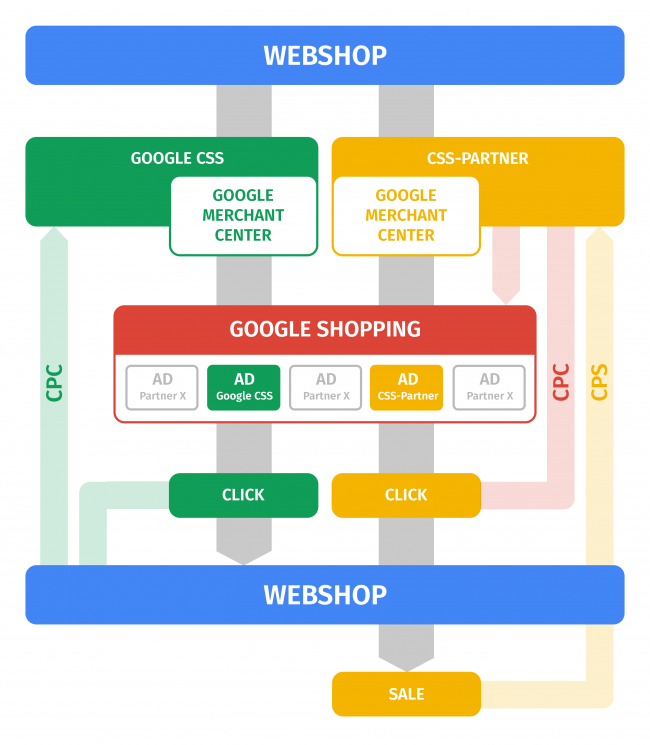 For more information watch these videos from Google about advertising through CSS partners.

Ready for more traffic and transactions?

The three key takeaways for collaborating with Google CSS partners, which we can take from our internal research, are: Curious about the developments in our network? Also take a look at:
– 5 tips for online retail in the corona crisis (Dutch only).